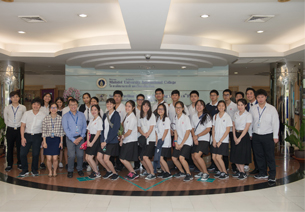 Five students from Mahidol University International College (MUIC) were given awards for their noteworthy performance at the Model United Nations Conference 2019 hosted by Thammasat University on January 11-13, 2019.

The Model United Nations (MUN) is an educational simulation event in which high school and university students can learn much about diplomacy, international relations, and the United Nations.

The event attracted 100 participants from 20 universities and educational institutions. They were assigned as representatives of various countries and participated in simulated proceedings in several UN committees as they sought to address global issues and advance their respective countries’ interests.

Not surprisingly, the five students are also behind efforts to establish an MUN Club at MUIC. This trimester, they are collaborating with the AIESEC Club to organize an MUN event on the theme of “Gender Equality and Women’s Empowerment” to be held on March 8, which is International Women’s Day.