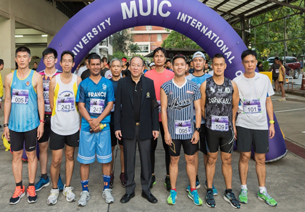 Assoc. Prof. Phitaya Charupoonphol, Dean of Mahidol University International College (MUIC) presided over “MUIC Family Run II,” a running event organized by the MUIC Alumni Association in collaboration with the College in honor of the Late King Rama IX on March 25, 2017 at the Salaya campus in NakhonPathom.

Following its success last year, the “MUIC Family Run” would be held as an annual activity to foster closer relations among members of the MUIC community. About 400 runners participated in either of two categories, the 10-km Mini-Marathon and the 5-km Fun Run. Participants donated cash, books and other school supplies which, together with the registration fees, will be given to schools that are in need as a tribute to King Rama IX.