The Visit of Taylor’s University, Malaysia 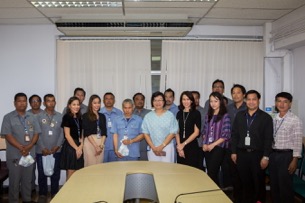 Mahidol University International College (MUIC) has implemented several measures to address the health risks posed by hazardous levels of particulate matter of 2.5 micrometers or less in diameter (PM2.5) found in the smog that has shrouded the Bangkok Metropolitan Region and nearby provinces for almost two months now.

In a meeting on January 30, 2019, Assoc. Prof. Dr. Chulathida Chomchai, MUIC Dean, distributed Vitamin C 500 mg, Vitamin E 400IU and Omega 3 Fish Oil 300 mg, which are antioxidants, to 20 employees who are at high risk due to their work outdoors. They included guards, gardeners, driver, and golf cart drivers.

The Dean also announced other measures which included alternating periods of outdoor time and rest time in order to decrease the employees’ exposure to high levels of PM2.5. All staff and faculty members were also given guidelines as their safety and health are the College’s top concerns.

MUIC also suspended classes and office work on January 31 and February 1, 2019 due to the reported high concentration of PM2.5. During the same dates, the Ministry of Education also ordered the closure of public schools in the Bangkok Metropolitan Region.