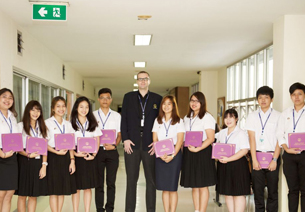 June 19, 2017: The Preparation Center for Languages and Mathematics (PC) carried out its orientation day for 183 new MP and PC students of the Quarter 3/2017. Held at the MUIC Auditorium 1318, MUIC Building 1, students and parents stepped in to hear what they are going to experience at PC.

Reaching over 400 active students in the third quarter, PC has recently recruited a new batch of PC and MP students to the school where they will be provided with not only courses for language and mathematical skills, but also a wide range of welfare, student activities, and academic support as they go through the program.

For posting the highest recorded average grade in Quarter 2, 2017, four students received the Outstanding Academic Achievement awards. They were:

Meanwhile, four other students were given Outstanding Contribution awards for acting as “a role model for other students because of their maturity, cooperation, and efforts to achieve academic and personal goals.” They were:

Moreover, three students also received special awards for their exemplary academic achievement and activity participation during Quarter 2/2017. They were:

2.) Mr. Phutanet Ukris, both awarded a level skip from PC1 to PC3; and

The orientation also brought back two former PC students who are now MUIC students,Mr. Yuan Yo WANG and Ms Sarocha Acharyakul, to deliver memorable life-at-PC speeches and inspire all of PC’s new pupils.