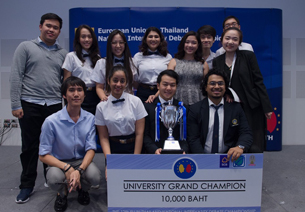 The competition was held at Chulalongkorn University from June 30 to July 4, 2017.