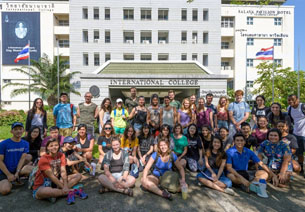 The Student Exchange unit, Mahidol University International College (MUIC), organized an orientation for exchange and visiting students who are enrolled in Trimester 3, Academic Year 2016-2017 on April 20-21, 2017. There were approximately 47exchange and visiting students from the US, Germany, the Netherlands, France, China, and others who attended the event held at the Seminar Room, MUIC Building 1.

Ajarn Brian Phillips, MUIC Assistant Dean for International Affairs and Networking, welcomed the students and gave advice about life in Thailand. Later, the exchange and visiting students joined Thai students who had signed up for the “MUIC Buddy Program” to plant tree saplings in a mangrove forest in Tambon Klong Kone, Samut Songkram province. This activity was meant to promote environmental awareness and develop a sense of nature conservation in students.