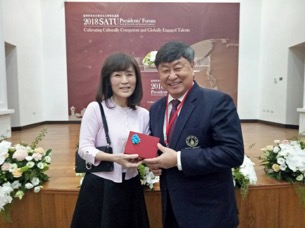 On 15 November 2018, Prof. Banchong Mahaisavariya, Acting President of Mahidol University, participated in the Presidents’ Forum of Southeast and South Asia and Taiwan Universities (SATU) Biennial 2018 General Assembly in Tainan, Taiwan (ROC). The event, hosted by National Cheng Kung University (NCKU), was under the theme “Cultivating Culturally Competent and Globally Engaged Talents”, focusing on training future leaders in agriculture, engineering, and medicine to be more effective in engaging with culturally diverse people worldwide.
On this occasion, President Mahaisavariya represented Mahidol University in the SATU Steering Committee Meeting and also served as a co-chair in the parallel sessions in Medicine at the General Assembly. He will also give a keynote speech on Advancement of the Medical Care & Role of University-Industry Collaboration at the event on 16 November 2018.