ศูนย์ภารตะศึกษา สถาบันวิจัยภาษาและวัฒนธรรมเอเชีย ม.มหิดล ร่วมจัดสัมมนาประจำปี The 8th Indian Ideas and Thoughts เรื่อง “Ideas and Scopes of Tourism between India and Thailand” 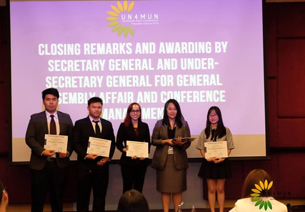 Ms. Rosemary Gosteli Dela Cruz was given the Diplomacy Award and the Best Position Paper Award based on her performance in the event.

UN4MUN is the official model United Nations procedure established by the UN Department of Public Information.

As part of the activities, Ms. Dela Cruz was assigned to play the role of a delegate of China in the United Nations Security Council, representing China’s views on issues that were discussed. The activity’s goal was to successfully draft a resolution (which had been agreed upon via consensus), as well as the completion of the presidential statement, press elements, and press statements.