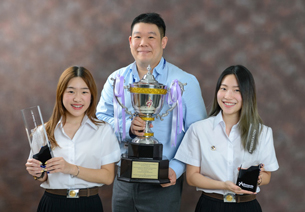 Ms. Thanatcha Vichienkalayarat and Ms. Kamolporn Ittisurasing, comprising the lone team from MUIC, bested 73 other teams from other universities all over Thailand with their entry called “Original Sensation,” a rice pop and Thai chicken green curry spread they dubbed as “Dip the Dish.”

Coached by their professors at the Science Division with Dr. Chayanant Hongfa as their adviser, the duo—who had spent at least a month preparing their winning entry—were proclaimed grand prize winners on February 9, 2018 at Parc Paragon in Bangkok.