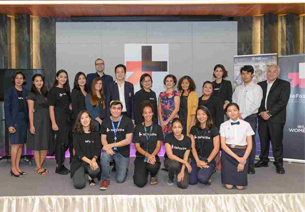 The Social Science Division of Mahidol University International College (MUIC) organized “HeForShe University Tour Bringing Gender Equality to Your Campus” together with the United Nations Entity for Gender Equality and the Empowerment of Women (UN Women) on September 13, 2019 at MUIC’s Aditayathorn Building.

The last morning panel was a moderated discussion and Q&A on the topic “What each of us can do to help achieve gender equality?”

The afternoon session was spent conducting an “Ideathon” which gave participants an opportunity to brainstorm ideas and come up with suggestions on the theme “Ending Gender-Based Violence on University Campuses.”

Bishop’s #DontTellMeHowToDress exhibition helped to deliver a strong message by displaying the clothes that survivors of violence wore when they were assaulted.

The HeForShe University Tour aims to bring awareness regarding gender inequality and its impacts to university campuses across Bangkok. The tour provides a forum for critical discussion, opportunities to listen and learn from guest speakers and students, and a chance for students to brainstorm actions and initiatives they can implement to end gender inequality in their communities. The HeForShe University Tour seeks to engage youth from all genders to actively participate in the fight for gender equality.