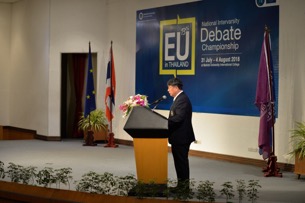 In his speech, Dr. Colin Steinbach, Head of the Political, Press and Information Section of the Delegation of the European Union to Thailand, praised the “eloquent and high-spirited” debaters. “You showed passion combined with politeness,” he said, adding that aside from “creativity, logic, eloquence,” the most important virtue of a debater is “empathy [which we need] in order to get reconciliation.”

He also thanked MUIC’s officials and Debate Club officers, members and volunteers for the successful hosting of the event.

Prof. Dr. Banchong Mahaisavariya, Acting President of Mahidol University, said he is deeply impressed with the strong skills of the debaters, adding that their participation in this premiere debating event “is an opportunity to demonstrate your capacity, widen your network, and gain valuable experience.”

The debate tournament ran from July 31 to August 4, participated in by 10 high schools and six universities. MUIC fielded four teams this year.