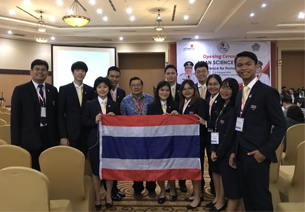 Ms. Wanutcha “Soon” Lorpaiboon was the lone representative from MUIC, joining several other students from different universities in Thailand. Ms. Wanutcha received certificates and a figurine of a tarsier as a token gift.

She said that her group (composed of five students from different countries) won the Best Poster Presentation Award based on the topic “Cleaning Up the Ocean.” On the other hand, during the question-and-answer forum in a discussion panel featuring seven scientific experts from around the world, Ms. Wanutcha’s question about DNA earned her the Best Question Award.

ASC’s organizers describe it as “an annual forum which aims to enlighten those science-talented youths through discussion and dialogue with top scholars in the world and to promote the international friendship and cooperation among the best young students of the next generation in Asia.”