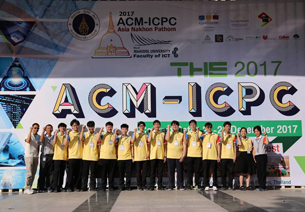 Assoc. Prof. Dr. Jarernsri Mitrpanont said “The 2017 ACM-ICPC Asia Nakhon Pathom Regional Contest hosted by Faculty of Information and Communication Technology (ICT), Mahidol University represents the geographic area of Pacific and Indochina Penninsula or Asia. The ACM International Collegiate Programming Contest (ICPC) is the oldest, largest, and most prestigious programming contest in the world conducted by and for the world’s universities. The ICPC is affiliated with the ICPC Foundation, enjoys the auspices of ACM, and is headquartered at Baylor University. The contest foster creativity, teamwork, and innovation in building new software programs, and enables students to test their ability to perform under pressure. The contest is sponsored by the ICPC Foundation and JetBrains is 2017 Global Tool Sponsor.

In ICPC competitions, teams of three students represent their university in multiple levels of regional competition. Volunteer coaches prepare their teams with intense training and instruction in algorithms, programming, and teamwork strategy. Several ICPC universities and ICPC volunteers provide online judging systems to all free of charge. Top teams from regional competition advance to the final round. This year’s regional competitions will advance teams to the World Championship round – the 2018 ACM-ICPC World Finals hosted by Peking University – which will be conducted on 15-20 April, 2018 in Beijing, China.

In last year regional contests, 46,381 contestants from 2,948 universities in 103 countries on six continents competed at over 530 sites to advance to the World Finals in Rapid city, South Dakota, United States. In the ACM-ICPC Asia Nakhon Pathom Regional Contest this year, there are 74 teams joining the contest. 26 foreign teams and 48 thai teams from 10 countries including China, Hong Kong, Indonesia, Japan, Malaysia, Singapore, South Korea, Taiwan, Thailand, Vietnam. There are 288 participants which are 222 contestants, 51 coaches, 11 co-coaches, 2 observers and 2 representative from sponsors.

Last but not least, on behalf of the Organizing Committee, I would like to express sincere gratitude to Professor C J Hwang, ACM-ICPC Asia Director. Many thanks go to the ACM-ICPC Thailand university network. Special thanks are owed to our colleagues from the Faculty of ICT, Mahidol University with the strong leadership from the ICT instructor technical team, engineering and system team, public relation team, international relationship team, registration team and organizing team for the continuing coordination and service to the organization of this contest.

Finally, we have the beautiful Salaya campus, Mahidol University. Among six campuses, Salaya is the most beautiful and greenest campus. Mahidol University is a home of world class medical school, science and technology, computer science and the famous college of music. We are proud to host the Asia Nakorn Pathom Contest which located in one of the oldest, full of history, delicious food and fruits city of Thailand.”