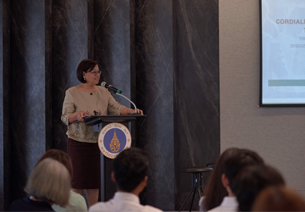 As part of its efforts to support the environmental cause, Mahidol University International College (MUIC) through its Science Division partnered with the French Embassy in organizing a panel discussion on sustainable urban environment on October 9, 2019 at the Charinyarasami Hall, Aditayathorn Building.

Entitled “Livable and Sensual Cities,” the panel discussion focused on air pollution, noise pollution, waste management, and sustainable urban systems. Part of the French Embassy’s ongoing effort to strengthen ties with local universities to promote collaboration and potential partnerships, the event is also the first of a series to be held not only in Bangkok but also in Singapore and Kuala Lumpur.