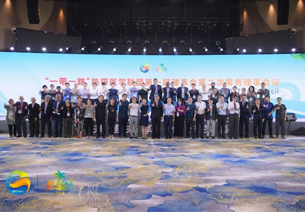 Delagations from FTM MU led by Prof. Srivicha Krudsood, Assoc. Prof. Porntip Petmitr, Assoc. Prof. Poom Adisakwattana, Assoc. Prof. Usa Boonyuen, and Lecturer Dr. Amornrat Aroonual have participated The Second Forum for Tropical Medicine of belt and Road Tropical Medical Alliance at Asia Bay International Hotel, Boao, Hainan China. FTM MU is appointed to be one of the Vice Presidents of BRTMA. Moreover, the members of BRTMA consisted of 105 Institutes from 30 countries over the world, and Prof. Srivicha was also cordially invited to be Keynote speaker on the topic “Togetherness for the Best research outcomes” under conference theme “Building Effective Research Partnerships for Tropical Medicine”. Her talk was captivating and also increasing chance to have partners participating in ICTM2020 in the next upcoming year. There were many representatives from other institutes showed interest and asked about ICTMM2020 Congress that will happen next year during 20 -24 September 2020. This Conference was successfully held by BRTMA organizing committee that led members to have a great chance to seek fruitful and outstanding collaborations and Research Partners. This was such a wonderful opportunity that has been offered to FTM MU to be the part of it. Afterwards, on 13 October, the FTM MU Delegations travelled to Haikou, Hainan, to pay a visit to Hainan Medical University, and Laboratories. In the afternoon, the same day, FTM MU delegations were warmly welcomed by The Second Affiliated Hospital of Hainan Medical University, Vice President Jing He and other executive board members. The delegations were accompanied to tour around the Hospital. The hospital is located in enormous area with many different department buildings, and also reported that there are over 100 organ Transplantation Operation cases annually. This report significantly showed that The Second Affiliated Hospital of Hainan Medical University has high potential and performance to help developing the well-being of Chinese population. The hospital have modern and high performance medical equipment. The tour was very impressive and both institutes will remain good relationship for further collaborations.