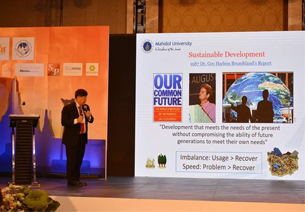 The APACPH Executive Council Meeting was held 19th to 20th chaired by outgoing president Professor Dr. Masamine Jimba, Tokyo University, Japan. The APACPH Executive Council Committee was held in the Surin Osathanugrah Meeting Room at the Faculty Phaya Thai Campus. The former minutes were approved, the Top Managers presented their reports followed by the Regional Directors and other collaborative initiatives were finalized.