Sustainability Seminar “LCA and policy on food, fuel and climate change: The Tools towards Thailand 4.0”

Mahidol holds on to top spot in Thailand in Webometrics rankings 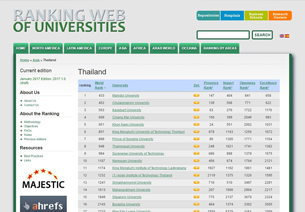 Mahidol University has been placed 433th in the world and ranked the best university in Thailand in the January 2017 edition of Webometrics Ranking of World Universities, which measures the global performance of each university through its web presence, visibilty and access.

The results of Webometrics Rankings, an initiative launched in 2004 by the Cybermetrics Lab, a research group under Spain National Research Council, are announced in January and July each year at http://www.webometrics.info.

Also known as Ranking Web of Universities, it departs from other world university rankings as it evaluates universities’ web-based academic performance, based on a composite indicator, combining a weighting system with a series of indicators as follows:

Visibility (50%) is evaluated using the number of all external links that the university’s webdomain receives from third parties. This link visibility data is collected from Majestic SEO and ahrefs, the two most important providers of this information.

Activity (50%) consists of presence (1/3), represented by the global volume of contents published on the university’s webdomains as indexed by Google; openness (1/3) represented by the number of files indexed by Google Scholar; and excellence (1/3) based on the university’s scientific output being part of the 10% of the most cited papers in their respective scientific fields between 2010 and 2014.