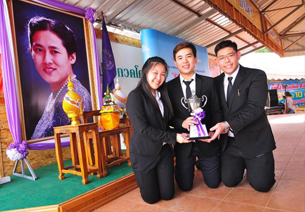 Teammates Mr. Piyawat Sangprasertkrid (Finance), Mr. Ariya Pongkularb (Marketing), and Ms. Kamolchat Chongviriyaphan (Marketing) were awarded a cash prize of THB100,000. In recognition of their achievement, the Princess Sirinthorn Foundation will award them with the Princess Cup.

The competition started last October, when the MUIC team had to battle 500 other teams from all over Thailand in coming up with the best marketing plan for Thai-Danish Dairy Farm’s expansion from manufacturing and distributing dairy products to establishing an agro-tourism venture. After surviving two rounds, the MUIC team was chosen to be among the five finalists.

They described the competition as “a great opportunity to learn and also meet new people.”

Meanwhile, MUIC’s cheerleader team won 2nd Prize in the cheerleading competition that was held in the same event.