Mahidol University is ranked the 1st in Thailand, according to Webometrics Ranking of World Universities. 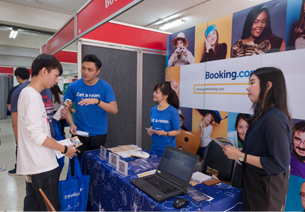 To give its graduating students a head start in the job market, Mahidol University International College (MUIC) held “MUIC Job Fair 2018” on January 24, 2018 at the Ground Floor, MUIC Building 1.

There were 92 companies that participated in the fair such as AccorHotels, ExxonMobil, Minor Hotels Group, Line Company Thailand, Deloitte Consulting, SCG and others. Students who visited the exhibition were able to learn more about their dream jobs directly from the company representatives. Interested students were also able to submit their applications. Aside from MUIC students, there were also many visitors from other faculties.

The following day, January 25th, students who plan to go on exchange studies visited the MUIC Study Abroad Fair where around 50 educational agencies and universities like the University of Northampton, Purdue University Fort Wayne, and California Lutheran University, among others, set up booths to entertain their queries.