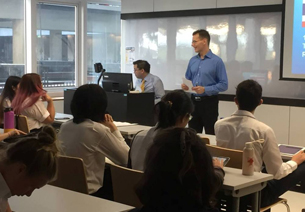 Dr. Paradorn used the recent celebration of Thailand’s 120th anniversary of diplomatic relations with Russia as a case study in presenting to the audience—composed of both Thai and exchange students—a glimpse of working in the Ministry of Foreign Affairs. The question-and-answer part of the program saw the young audience asking questions that revealed their interest in international relations and diplomacy.

Dr. Nigel Gould-Davies, a faculty member of the Social Science Division, organized the talk, held on January 29, 2018 at Aditayathorn Building, as part of his Diplomacy and Negotiations course.