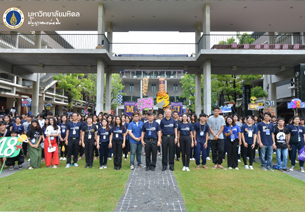 Mr. Naphat Mangkharat, President of Mahidol University Student Council for the year 2017, reported to the President about the activity and lead new students to pledge for the determination for benefits of others, anti-drugs, smoking, alcohol, and corruption.