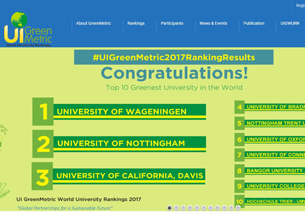 UI GreenMetric World University Ranking 2017 was announced by University of Indonesia (UI), Mahidol University ranked at no. 86 in the world and no.1 in Thailand as a green university from 619 worldwide universities. The rankings are based on six performance indicators: Setting and Infrastructure, Energy and Climate Change, Waste, Water, Transportation, and Education.

Mahidol University has got the determination to be Green University since 2008, during the administration of president, Clin. Prof. Emeritus Piyasakol Sakolsatayadorn, M.D., under the policy “A Promised Place to Live and Learn with Nature” to build 70% green areas in campus for creating eco-friendly environment, building natural learning space in order to grow imagination and learning. In addition, the university aims to serve as public green space for neighbor communities’ recreation activities and a pilot site for sustainable environment and energy saving through many activities and projects. Thereafter, Clin. Prof. Udom Kachintorn, M.D., next term president of Mahidol University, has continued the work and put it in 1 of 4 university strategies: Excellence in management for sustainable organization.