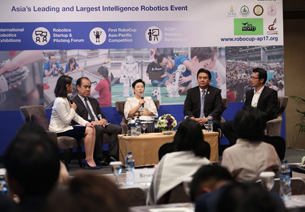 14 December 2017 – Thailand Robotics Week 2017 and RoboCup Asia-Pacific 2017 officially begin today with Science and Technology Minister Dr.Suvit Maesincee presiding over the ceremony. Thailand has been chosen by The International RoboCup Federation as the host of RoboCup Asia-Pacific 2017 (RCAP 2017), the region’s first academic robot competition, with aim to encourage research and development of robotics and automation systems, develop human resources for the field, create networks of robot inventors, and raise robotics standards of Asia-Pacific countries. Held as a part of the Thailand Robotics Week 2017, the competition will run from December 14 and 17 at the Bangkok International Trade and Exhibition Center (BITEC) and its Robotics Symposium part will take place at the Mahidol University’s Salaya Campus on December 18.

Dr.Suvit Maesincee, minister of Science and Technology, says while presiding over the opening of Thailand Robotics Week 2017 and RoboCup Asia-Pacific 2017 that, “The government has initiated the ‘Thailand 4.0’ policy for the purpose of bringing Thailand out of the middle-income trap. In order for Thailand to become a rich nation or for Thailand 4.0 to really materialize, new industries or the New S-Curve industries must be developed. Among them is the robotics. At present, demand for robots has already been fast rising in various sectors. Entrepreneurs have turned to robots to deal with labor shortage, to boost their productivity, and also to increase their competitiveness, and support their manufacturing for export markets. By the way, Thailand has still relied on imported technologies. The government thus issues an urgent policy to fast develop Thai robotics cluster. It’s a priority”.

“The government has now promoted robotics cluster through supportive funds, joint ventures and tax incentives. Entrepreneurs in the field are eligible to claim tax deductions for their expenses and depreciation. All such motivations are made available to support Thai robot manufacturers. They also encourage the use of locally-produced robot parts. So far, to ensure the sustainable robotics cluster in Thailand, it is necessary that we focus on Research and Development so that Thai robots and automation systems become really commercial viable. Our goal is the same as that of Thailand Robotics Week 2017 and RoboCup Asia-Pacific 2017,” he adds.

“These events spur R&D efforts for robot and automation among Thai inventors. Moreover, these are the forums whereby Thais can learn from and check the competitiveness of foreign robot manufacturers. On top of this, the events will provide robot manufacturers with access to investors. So, Thailand Robotics Week 2017 and RoboCup Asia-Pacific 2017 are undeniably huge contributions to efforts to drive Thailand’s robotics cluster growth, develop human resources for the field, and connect robot inventors with enterprises. In addition, Thailand Robotics Week 2017 and RoboCup Asia-Pacific 2017 showcases Thai robot manufacturers’ potential to the whole world,” Dr.Suvit concludes.

Asst.Prof.Dr.Jackrit Suthakorn the General Chair organizing Thailand Robotics Week 2017 and RoboCup Asia-Pacific 2017, says, “Thailand first joined the World RoboCup in 2002. By now, Thai teams have already won RoboCupRescue and RoboCupSoccer championships in some years. Just as Thailand’s robotics has progressed significantly, the Thai government via the Ministry of Science and Technology, the Ministry of Industry, the Ministry of Digital Economy and Society, etc, has also seriously promoted robotics development. The International RoboCup Federation, therefore, has much confidence in Thailand and entrusted it with the mission of hosting the RoboCup Asia-Pacific 2017”.

“Organizing the event are the Mahidol University, N.C.C. International Event Company Limited, the Thai Robotics Society, and the International RoboCup Federation, with support from Thailand Convention and Exhibition Bureau (TCEB) Public Organization. Together, we have decided to organize the Thailand Robitics Week 2017 and stage the RoboCup Asia-Pacific 2017 as a part of it. The goal is for the event to reach a wider range of targets. Its targets cover not just students or government agencies but also startups, software developers, system integrators, entrepreneurs in various industries, as well as financial institutes, investors, or venture-capital providers. In all,

At present, more than 130 teams have already registered their participation. These participants are divided into two groups. The first group is for participants in the RoboCupJunior League or the contest for those aged no more than 19 years old. The RoboCupJunior League has four categories: RCJSoccer, RCJRescue, RCJOnstage, and RCJCo-Space. The second group is for participants in RoboCup Major League or the contest for those aged over 19 years old. The RoboCup Major Leage cover the traditional categories of RoboCupSoccer, RoboCupRescue, RoboCup@Home, and RoboCup@Work plus four new categories known CoSpace Logistic Challenge, CoSpace Grand Prix Challenge, CoSpace Rescue Challenge and CoSpace Small Size League Challenge. At the International Robotics Exhibitions, more than 20 system integrators from Thailand’s Robotics Cluster and educational institutes, both privately-run and state-owned, join in as exhibitors. The world-class exhibition on the World Robot Summit (WRS) is a highlight in this zone. The Japanese government will stage this important summit in 2020 – which is designated as the golden year for Japan’s robotics industry.

Another big highlight of Thailand Robotics Week 2017 surrounds its Robotics Start Up & Pitching Forum. Here, startups producing robots and automation systems will exchange their ideas with experts and take part in a pitching contest. Thai and foreign investors will listen to their presentation, offering them opportunities to access venture capital. Between 30 and 40 startup teams are expected to pitch their ideas for the venture capital at this forum, as about 30 financial-institute representatives will show up for their presentation on how to use robots, automation, artificial intelligence or IoT (Internet of Thing) in improving industries or solving their problems.

The Robotics Symposium is also a core part of the Thailand Robotics Week 2017. At this international conference, participants will exchange their information and knowledge. On stage will be internationally-recognized experts such as Satoshi Tadokoro, the president of IEEE Robotics and Automation Society, Daniel Lee, the director of GRASP LAB of Pennsylvania University, Adam Jacoff, founder and chair of RoboCupRescue Robot League from the National Institute of Standard and Technology.

“Thailand Robotics Week 2017 and RoboCup Asia-Pacific 2017 take place through the collaboration of the government, the private sector and also educational institutes with the ultimate goal of bringing Thailand’s robot industry on par with international standard and of facilitating development based on Thailand 4.0 policy. The events, in all, will benefit not just robot inventors but also the whole Thailand particularly at the time it is urgently upgrading its robotics R&D in response to the Thailand 4.0 policy. Robotics is one of five New S-Curve industries under the policy, which promotes innovation-driven economy,” Asst.Prof.Dr.Jackrit concludes.