Mahidol University welcomes the National Vaccine Institute, discussing on the preparation of basic structures and supports for COVID-19 vaccine development 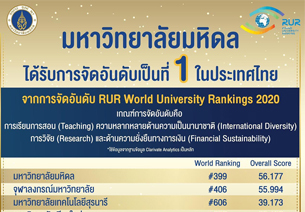 Prof. Banchong Mahaisavariya, Acting President of Mahidol University, announced that Mahidol University is top-ranked among Thai Universities in the World University Rankings 2020 by Round University Ranking (RUR), the ranking agency based in Russian Federation. The university is ranked at the 399th in overall scores among world universities and was up from the 428th last year. The result was published on May 1, 2020 on the website: https://roundranking.com/ranking/world-university-rankings.html #world-2020.

According to the Ranking result, Mahidol University is ranked no.1 among Thai universities in Teaching and International Diversity (ranked by indicators), and globally ranked the 242nd and the 457th, respectively. Also, the university also ranks the 1st in 7 indicators. Out of 20 domestic and global indicators, Mahidol University gains the position of the 140th in Academic staff per student, the 144th in Academic staff per bachelor degrees awarded, the 515th in Citations per academic and research staff (based on information received from Web of Science system), the 643rd in Share of international students, the 457th in International level, the 40th in Institutional income per academic staff, and the 35th in Institutional income per students.