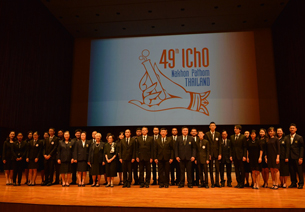 On 22th June 2017, Clinical Prof. Udom Kachintorn, M.D., President of Mahidol University, together with Assoc. Prof. Tatchai Sumitra, Ph.D., Chairman of The Institute for the Promotion of Teaching Science and Technology (IPST), and Assoc. Prof. Piniti Ratananukul, Ph.D., Deputy Secretary-General of The Promotion of Academic Olympiad and Development of Science Education Foundation under the patronage of Her Royal Highness Princess Galyani Vadhana Krom Luang Naradhiwas Rajanagarindra (POSN) made an announcement as the representatives of Thailand in honor to host The 49th International Chemistry Olympiad for an auspicious celebration of Prof. Dr. Her Royal Highness Princess Chulabhorn Mahidol, as widely recognized to be Scientist Princess of Thailand, at Prince Mahidol Hall, Mahidol University, Salaya Campus.

Clinical Prof. Udom Kachintorn, M.D., President of Mahidol University, was announced for the readiness of Mahidol University by Faculty of Science and alliance institutes to organize and welcome more than 600 students and mentors from 76 participating countries and representatives from 3 observer countries including all committees whom will join the event. There will be 4 representatives to the competition from Thailand, which are Mr. Bowornthat Boonrak and Mr. Paphaphat Dissaneevate from Mahidol Wittayanusorn School, Mr. Varit Chantranuwathana from Chulalongkorn University Demonstration School and Ms. Apisara Kaweyanun from Triamudomsuksa School, Bangkok.

As Hosting for The 49th International Chemistry Olympiad, not only shown for an international acceptance on academic standard of Thailand, but also encourage for academic environment to inspire for science and technology teaching and learning to build up manpower who has knowledgeable for innovation and to be Tech Startup leading for Thailand 4.0. The competition will be held on 6 – 15 July 2017 at Mahidol University, Salaya Campus