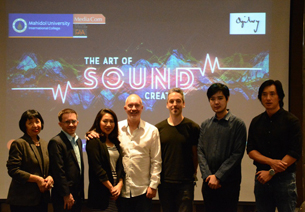 The Media and Communication Program of the Fine and Applied Arts Division, Mahidol University International College (MUIC), together with Ogilvy and Mather (Thailand), held a one-day master class called “The Art of Sound Creation,” on July 15, 2017 at AETAS Lumpini.

The event is described as “a revolutionary one-day master class workshop that will allow participants to develop a unique style when composing music and sound.” The participants learned how sound and music meets marketing, and how to integrate them together in order to take it to the international market. The workshop featured four masters from the sound design and advertising industry:

Mr. Yuthapong Varanukrohchoke, an advertising specialist from Ogilvy and Mather (Thailand), whose popular works include commercials for Coca Cola, KBank, and many more.

Mr. Kevan Frost, a British producer, music director, and composer, who was nominated for the Tony Award for “Best Original Score.” He has worked with many world-class artists such as Boy George and Mark Ronson.

Mr. Rapeedech Kulabusaya, composer, producer, and music director of Studio 28, known for his work in numerous advertisements and musical such as “Glai Gungwon The Musical.”

Mr. Jake Craig, sound engineer from Studio 28 who has worked in the audio, music and film industry for over 13 years, with a focus on classical and experimental music recording.