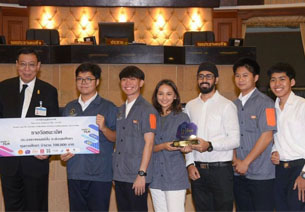 The “D 7 Days” is a contest that encourages the youth to show their loyalty and gratitude to the late King Bhumibhol Adulyadej by performing good deeds everyday (thus the “7 Days” title). The competition is divided into four categories: short animation, short film, photography, and poster. Some selected works from this competition will be exhibited at Parliament House on September 27 – October 31, 2017 and at the Eden Zone, Central World on October 16-31, 2017.