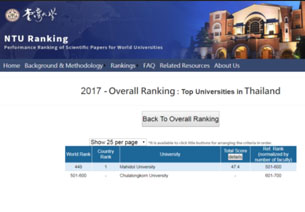 On October 10th, 2017, NTU Ranking, known as The Performance Rankings of Scientific Papers for World Universities, has been released by National Taiwan University. This time Mahidol University has once again been recognized as Thailand’s top research university. The latest results of the NTU Ranking also reinforce the university’s status as the country’s top research institution for pharmacology & toxicology, medicine and life sciences.

(2) number of articles in the current year;

(4) number of citations in the last 2 years;

(5) average number of citations in the last 11 years;

(8) number of articles in the current year in high impact journals were used to assess a university’s overall scientific paper performance: research productivity (accounting for 25% of the score), research impact (35%), and research excellence (40%).