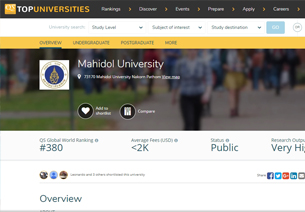 On 7th June 2018 (GMT+7 time), QS World University Rankings 2019 Results were released on the website: topuniversities.com, at which over 1,000 universities were ranked. Despite the similarities between this year and the previous year’s ranking indicators and the ranking weights, the survey databases concerning academic peer reputation and employer reputation were extended in order to cover all regions in the world. In fact, the survey response percentage increased by 38% from last year. Moreover, this year, the number of the participated universities has escalated from 980 (2018 results) to 1,233 (2019 results) – which 916 and 1,011 universities were ranked, respectively. Globally, the citations per faculty average has increased from c.52 citations per faculty member in 2018’s edition to c.60 citations per faculty member in 2019.