พิธีมอบประกาศเกียรติคุณให้แก่ผู้ที่สามารถเลิกสูบบุหรี่ได้สำเร็จจากโครงการ “The HERO 2nd : No Smoking” 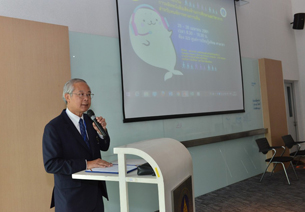 This particular project accounts for an academic service, catered by the disability support services unit, under the division of Student Affairs, Mahidol University. It aims to support academic media production, such as academic audio books that give more learning opportunities for the learners with visual disability. Taking place from the 25th – 26th April, the training consists of experiences sharing from Mr. Nuttapong Luenpan, a visually disabled graduate from the Faculty of Information and Communication Technology, Mahidol University. During his talk, he lectured how to use “GQ code”, an audio barcode for visually impaired users, and how to create DAISY (Digital Accessible Information System) Digital Talking Book.