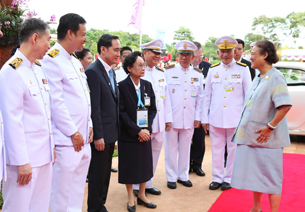 On 9 August 2018, Her Royal Highness Princess Maha Chakri Sirindhorn presided over the opening ceremony of The 12th International Earth Science Olympiad : IESO 2018 , in which 38 teams from all over the world participated. The competition took place at Mahidol University kanchanaburi campus.

Last year’s competition in France, teams of Thai students have been sent to nine IESOs and won a total of 34 gold, silver, and bronze medals, and one honorable certificate. They also received the highest score once in each of the following categories: the world’s overall, theoretical examination, and astronomy