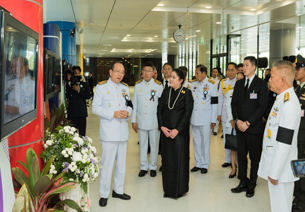 During the ceremony, the Princess presented an offering to the monks, granted memorial badges to the College’s outstanding alumni and benefactors, viewed the Aditayathorn Building exhibition and signed her name on the stele. The Mahidol University Alumni Association Secretary presented the Outstanding Alumni Award to Her Royal Highness.

Aditayathorn Building is named in honor of Her Royal Highness Princess Aditayathorn Mahidol who is also a distinguished Communication Design alumna from MUIC’s Fine and Applied Arts Division. The six-story building has a total floor area of 67,901 square meters, with 30 standard-sized classrooms, a new library along with acting and production labs for Fine and Applied Arts division. The new building will also have three levels of underground parking, four canteens and eight restaurants, a large student activity plaza and an all-glass function room floating in the middle of the central court garden. Aditayathorn Building will be ready for occupancy on April 2017.